Silicon Valley giant Apple has shelved plans to launch a Unified Payments Interface-based payments platform in India after landing in a regulatory grey zone that has stalled the full rollouts of similar products by Amazon and WhatsApp as well.

Apple put the brakes on introducing Apple Pay in the country despite holding discussions with a few leading banks and the National Payments Corporation of India, which manages the UPI platform, said two people with knowledge of the matter.

The main worry for Apple is the Reserve Bank of India’s recent data localisation rule, they said, adding that the company also ran into technical and design hurdles related to the flow of payments on UPI. “Apple will not launch payments in India yet. They are waiting to see how the regulatory landscape shapes up,” one of them said.

RBI’s data localisation rule that requires companies to store all their payments data only within India has made uncertain the plans of other multinational companies as well, including Mastercard, Visa, Amazon, WhatsApp and PayPal.

Even Google, which has laid out aggressive plans for its UPI-linked payments platform in India, has said it is assessing the evolving situation around data localisation.

Apple did not reply to emailed queries on the matter.

Eddy Cue, Apple’s senior vice-president for internet software and services, had told ET in October that the company was looking to bring Apple Pay to the Indian market. “It is great that all of these payment mechanisms are coming out in India because it empowers people to be able to pay. What Apple Pay does is make that process easy, integrated and safe. We absolutely want to bring Apple Pay to the market here,” he said in the interview last year.

One of the two people mentioned earlier said Apple was expecting to launch its payment service in India a couple of months ago. However, a third person aware of the developments said there was no specific timeline for the launch of Apple Pay in India.

Elaborating on the design hurdles, a banker said Apple wanted to include fingerprint as a mode of authentication for UPI payments, which NPCI did not agree to. UPI requires customers to enter a sixor four-digit number to authenticate transactions.

“NPCI has prescribed that transactions can be authenticated by biometrics only when they get validated by UIDAI,” said the banker. “NPCI does not allow biometrics collected by devices as a mode of authentication.” 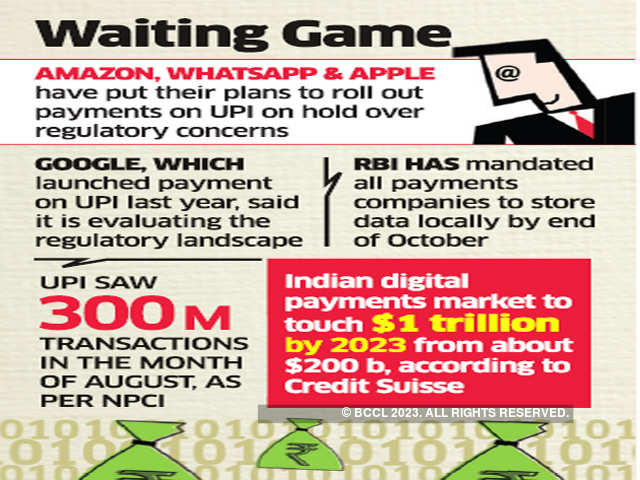 Procedural guidelines prescribed by NPCI clearly state that authentication using biometrics or Iris recognition will have to be validated by the UIDAI which issues the biometrics-based Aadhaar digital identity numbers.

Apple has had a few rough months in India recently, losing some top executives here and running into an impasse with the telecom regulator over supporting its do-not-disturb app. Last month, the iPhone maker agreed to include about 75% of the features of the DND app in its new operating system.

Amazon’s plan to launch its own UPI payment service in the country is also stuck due to concerns over the data localisation rule, ET reported last month. WhatsApp, which a few months ago began piloting a payments feature on its popular messaging app, too, has put on hold its plans to go fully live on UPI. Industry experts have voiced concerns about the regulatory hurdles in the payments space for both domestic and global companies.

“The Ratan Watal committee had recommended important regulatory reforms to unlock the potential of digital payments in India in December 2016 but there has been little progress since,” said Ashish Aggarwal, head, public policy, at IT industry body Nasscom. “If we want to create a truly competitive and predictable regulatory framework in payments, the committee’s recommendations must be implemented.”